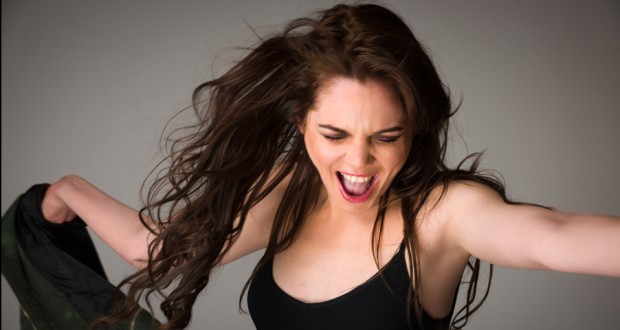 Today we bring you the last, but certainly not the least,  interview with the participants of the Slovenian national final EMA 2015. Yes, it’s time to chat with Jana Šušteršič. She will perform a song Glas srca (The voice of the heart).

Hi Jana, would you be a dear and introduce yourself a bit.

Hello everyone. My name is Jana, I’m a singer and a pianist, born in Slovenia, grew up in Belgrade, Serbia. The stages of my music life would look something like this:

1. Piano – Since I was 7 years old I had numerous appearances as a soloist and with orchestras, I won prizes abroad and enrolled at the Academy of Music at age of 17. When I …

2. Became a member of the group „Neverne Bebe“ (Unfaithful Babies) - coming years have brought love, commitment, experience, a whole new world, so much music lessons and more friends and most faithful fans in the world who are still there. :) After eight years in the band I was, wanting to learn more …

3. So I’ve sent an application to Berklee College of Music and received one of the highest scholarships to study singing in Boston, even though I never studied singing. During my stay, I was able to reach a full scholarship, to perform and collaborate with some of the biggest names in the world of the music business and the most poetic artists that I met: Patrice Rushen, Larry Simpson, Victor Wooten, John Blackwell… I have learned enough to be independent, I’ve learned to listen to music and let her breathe out. I am perfecting my voice and discovering so much new about myself. Now, four years later, I’ve graduated from the Berklee College last May, performing in front of Jimmy Page of Led Zeppelin at Boston arena, and from finishing masters in the same school I’m now only a couple of months away.

4. Last September, besides the enrollment of master at Berklee College, I have also applied at the Slovenian edition of “Got talent“ show, where I won last December. I am so thrilled with the reception of Slovenian public, the media and my family there! I am happy that I made the step which after and with so much effort opened many new roads, helped me to help my family and myself and made so many new friends and challenges! :)

When did you decide to sign up for EMA?

After the victory in the Slovenian Got Talent, I thought that the moment was perfect to repay and thank the Slovenian audience for their incredible support from day one and kept my promise that there is much more they should expect. :)

I bonded with it, when I heard it for the first time. I felt it’s potential and how much space it gives to my voice and energy! The story is strong and honest, and I know that a lot of people will identify themselves. I cannot wait to show it to you all, instead saying it. ;)

Who do you consider your biggest competition from the other participants of EMA?

I don’t really think about it. I never realized the word competition as a negative one. The presence of others who are struggling and want the same thing as I doesn’t scare me. On the contrary, it makes me even more energetic and happy while I enjoy watching great performances in which we all have invested a lot of time. And I know that it will be like that this Saturday at EMA! I could only think a song that would be better than mine as a competition. :)

What is your favorite Slovenian Eurovision song and some other overall?

I really like the song that was performed by Maja Keuc, as well as Tinkara Kovac’s. On the other hand, I like Euphoria and of course I cannot skip to mention my dear Jelena Tomašević and Marija Šerifović!

And finally can you give some kind of a message to our readers.

Stay tunned and support. :) I can’t wait to see you all again! And God willing, Boka Stamenov and I will send you pictures and kisses from Vienna! :)

Jana, thank you for setting aside this time for us. We wish you the best on Saturday!

Thank you all also. Many regards to everyone!!!