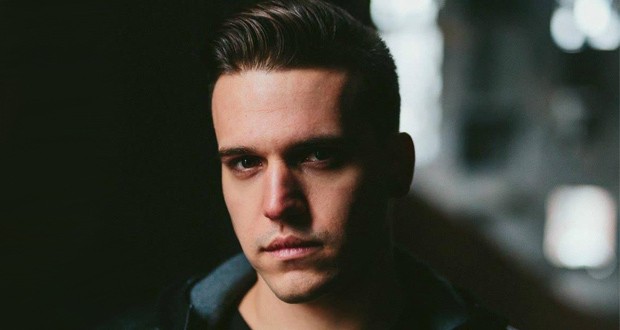 There remain only 8 days to the Slovenian selection for the Eurovision Song Contest „EMA 2015″. Tim Kores Kori is the sixth out of eight EMA participants that we managed to talk to. He was kind enough to answer our set of questions that all other participants are getting. Check out his answers and tell us your opinion. What do you expect of him and his song „Once too many times“?

It would be nice if you introduced yourself a bit to our readers.

My name is Tim Kores. Music has been my best friend since I was a little kid singing Michael Jackson’s songs. But after some years, metal music touched my ears and I’ve never let go of it. So basically I come from metal music origins and I still have a metal band called “I vs. I“. But as I tried to learn to enlarge my musical specter and tried in different types of music, I went on X Factor Slovenia where I came to the finals. I won 3rd place along pop-rock band called IN&OUT. Through the years I toured a lot. I went through a lot of studios and learned about show bizz. But as time moved along I was creating a lot of my own musical styles.

When I saw the call for EMA, I had one good song, which was almost full made. I just knew it was just like made for EMA. Not long after me and producer Dejan Radičevič recorded a demo that we sent to RTV SLO and then, from 145 applications, our song was chosen.

The song is very modern. It has elements of pop and rock. I am very proud of my song, and I hope everyone will like it. :)

Among other EMA contestants, who do you think is your biggest rival?

Ah, now I would say that all the other seven participants in the competition are my rivals, since I haven’t heard their songs, so I could not tell who is the biggest. :) I am my own rival. :)

What’s your favorite song that represented Slovenia at the Eurovision Song Contest, and Eurovision overall?

And in the end your message to our readers.

Love each other, don’t always be on Facebook and Instagram,  go out for a cup of coffee :) Anything is possible, if there is a will. Be healthy and best regards from Maribor!

Radio-television Slovenia announced the order of appearance in the competition: