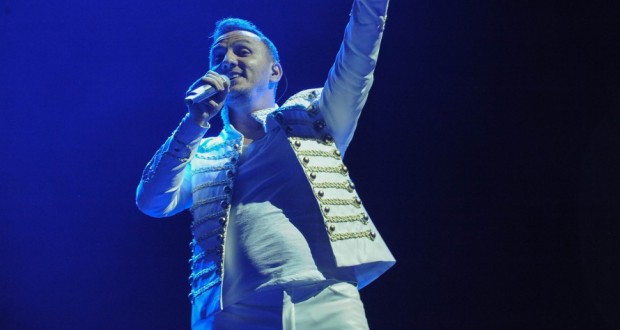 Romanian singer, M I H A I, speaks for OGAE Serbia about fifth place in Selectia Nationala, his new music, about a song ‘Paradisio’ and his future plans about Eurovision Song Contest.

Firstly, I want to say a congratulations for fifth position in Selectia Nationala. Are you disappointed, and did you expect to win?

Mihai: I was afraid about the jury and… my fears were real. :) They influenced the voters to vote other guy.  Don’t worry. That’s what I expected. Next year I’ll try for another country.

Did the judges of the final show made you feel angry?

You said that the next time you are going to try for Moldova, but never again for Romania. Can you tell us why?

And can we expect you next year?

Once you said that „Paradisio“ is better song than „Tornero“. Is that the biggest reason for your disappointment?

Mihai: Paradisio was more sensitive than Tornero, the refrain is very catchy… My voice is better than 2006. :)

Mihai: I waited for ten years for Paradisio. That’s why I was disappointed. And I knew that the jury will do EVERYTHING to convince people not to send me.

What „Paradisio“ as a song means to you?

Do you think that „Moment Of Silence“ have a real chance on Eurovision stage?

It’s been ten years since Eurovision in Athens. What are your feelings about that show?

Can we expect your new music soon?

Mihai: Yes. I prepare a new album… so… stay tuned.

If you could choose an one artist to collaborate with who would it be?

And would you like to visit Serbia someday and maybe have a concert here?

Mihai: Of course I would love this.

Thank you so much for your time.

Look at the performance of M I H A I in the final of the Romanian national selection, held on 6th of March.